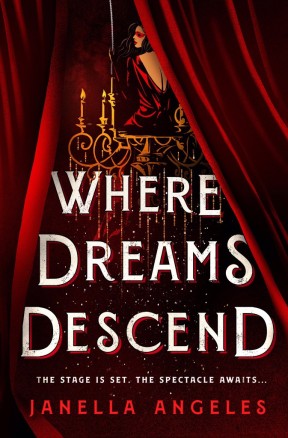 In a city covered in ice and ruin, a group of magicians face off in a daring game of magical feats to find the next headliner of the Conquering Circus, only to find themselves under the threat of an unseen danger striking behind the scenes.

As each act becomes more and more risky and the number of missing magicians piles up, three are forced to reckon with their secrets before the darkness comes for them next.

The Star: Kallia, a powerful showgirl out to prove she’s the best no matter the cost

The Master: Jack, the enigmatic keeper of the club, and more than one lie told

The Magician: Demarco, the brooding judge with a dark past he can no longer hide

This debut was lush and addictive, the writing had me gripped and awestruck. I can’t believe that ending. My heart was pounding like crazy.

The story follows Kallia, a showgirl who wants to do more, be more. A world where women magicians are rare and only could be showgirls, Kallia is ambitious and skilled and she wants to prove it to the world. When the opportunity to participate in a magical competition arises, she escapes to the town nearby for the competition despite warnings from her mentor. I really liked the writing, it was addictive and rich. The writing flowed through the pages and it was full of tension and foreboding that kept you at the edge of your seat. The story was captivating and full of tension and angst!

The book mainly focuses on three characters: Jack, Kallia and Demarco. The protagonist Kallia is ambitious and fierce, in a male dominated world, she is keen to show her skills and show just how powerful she is. She is a little narcissistic and arrogant and I felt like there was a lot of mystery in her past such as how she was found and her parents that was not explored. Her character and background could have been developed more to allow the reader to fully know her. Demarco was quite an interesting character, damaged with guilt and a dark past that he is trying to understand and is on a mission to fix what happened two years ago, using the opportunity to become a judge and investigate the cursed city. Now Jack. Jack. Jack.  He is a dark, seductive and an enigmatic character. The master of the club and many secrets. I definitely need more of him because his  actions remain a mystery, his secrets unexplained.

I liked the plot a lot. It was unique and refreshing. There was so much going on but I have so many questions. More questions than answers. I felt like so many things about the world was dropped yet not explored and developed. The history of the cursed city, the mirrors, the notes, the circus, the missing magicians. So many plot lines introduced yet not solved or developed. No explanations. Nothing.

The romance. ugh I hate this little love triangle because I love Jack and his broody, mysterious character. I felt the chemistry between him and Kallia but I also liked Demarco and his soft and sweet character. I don’t know who I ship her with.

The competition, I felt like I barely saw it. Kallia was supposed to be competing with these powerful magicians, but I barely saw them and every time Kallia would win and I felt like there wasn’t really a competition. Another thing I found strange was Aaros, she earns the loyalty of a thief after she doesn’t turn him in to the guards but I just didn’t understand how suddenly he was like her best friend. I felt like I didn’t even see a lot of Aaros to even connect with him. We barely knew anything about him and suddenly he was her stage partner/ best friend. Their friendship just didn’t feel real.

Omg the cliffhangers guys. The last few chapters were intense and left my heart pounding. Overall, this was an amazing debut, yes I wish the characters were developed more and there was more world building but I really loved the writing, I could see the story starting to come together at the end and I would definitely recommend this book.

Thank you to the publisher for sending me a copy of this book in exchange for an honest review. All opinions are my own.

Hi I'm Asmaa, I absolutely love reading and I thought it was about time I started this blog that I have been planning since forever. Here I will express my thoughts about books and rabble about book related things. View all posts by thechroniclesofabookworm